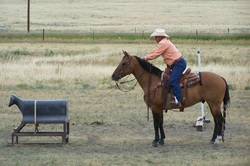 Owned and ridden by Charlie Stewart 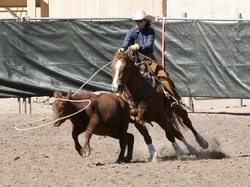 Owned and shown by Rita Lauby, Lil Bit O’Badge, a/k/a  Marshall, is  “an awesome athlete with a very strong work ethic … who thinks ahead and doesn’t like to make mistakes.” 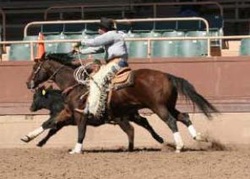 Little Bell Pepper was ridden to his Legend Award by both Henry Block of Colorado and Jennifer Sadler of Arkansas.  Considered “One of the greatest versatility horses I have ever ridden.” by Jay Henson and everyone who has had the privilege of owing and showing the 2001 bay gelding. Pepper, n/k/a Cowboy, has consistently proven himself as a champion and one of the best versatility horses in the sport.

A Time to Spark is as talented as he is beautiful.  The 2001 buckskin gelding is an NRCHA money earner, marking AQHA ROM’s in Roping, Working Ranch Horse and Versatilty Ranch Horse, and capturing the IBHA
World Champion Cutting Horse title.  And don’t forget the many times we all looked at him from down the line
(sometimes, way, way down the line) in the Conformation class. 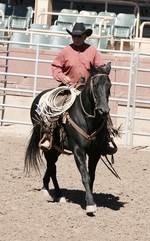 Dave Currin acquired Doc’s Second Best, a/k/a Diva, in  2004 and began their two-year journey towards the Legend award.  Dave admits that his “Driving force was to have fun and improve my  horsemanship skills. And that was a
huge shift in life philosophy for me.  This award is the culmination of my personal journey.  And, you know, I am looking forward to the future now that I know I really might be able to do this!  My skills and teamwork with my black mare continue to evolve, and someday I hope to come up to her level.” 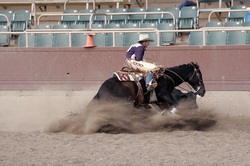 Double Tuckered Out a/k/a JJ, came to live with Tim and Cindy Rose in 2003.  After spending a day with Jay Henson riding several horses, none compared to JJ.  Cindy immediately felt at ease and comfortable with the big bay gelding.  She vividly remembers her first ride and how in sync she felt with JJ.  “He was a gentle horse with smooth motion,” says Cindy.  She knew, without a doubt, "that this was the horse for me."  And so it started … Cindy admits that JJ knew a lot more than she did at the beginning.  "I was able to learn all of the parts of VRH because I could concentrate on me and not have to worry about the horse," says Cindy. On JJ’s winning the Legend Award, Cindy said, “JJ has worked very hard and he deserves every point.  In my opinion, he is and always will be one of the best versatility ranch horses in America!”
NVRHA Rundown, Vol. 2, Issue 3, Winter 2010, p. 18-19